Meopham in 1927, was a small village, and largely a farming community. Adjacent to Meopham Green was situated Mount Zion Strict Baptist Church, and after much discussion among the members of the church at the time over a ‘closed’ communion table policy, some members left to form the Meopham Assembly Hall. Land was made available, and on 5th June 1927, the church was formed.

A ‘tin hut’ mission hall was erected on our current site.

There was no association to a mainstream denomination, although believers baptism was carried out.

The church was a viable Christian community set amongst fields alongside a main road. The Word of God was faithfully preached by William Dereham and guest local speakers.

The ravages of time and World War 2 meant the original building had deteriorated to such an extent that rebuilding was the only option. God gave the members a vision to expand their building. In 1976, under the guidance of a gracious Lay Pastor, Jack Eade, building plans were put into operation.

Jack Eade caused the church to be renamed and to be affiliated to the Baptist Union of Great Britain. A loan was negotiated, local support energised, and the people built the proprietary building themselves with much effort and sacrificial time. The church building was formerly opened in 1985. 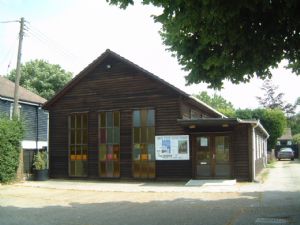 Pastor Eade was an inspiration to many for 13 years, and then oversaw the calling of the first full-time minister, Rev Alan Rogers in 1987. Rev Rogers was inducted on 3rd June 1987, and resigned in 2000, during which time there was consolidation and some spiritual growth.

An Inter-regnum of six years followed during which time the character of the village changed and it has become more of a location for commuters to London.

Through God’s wisdom and the interaction of the Holy Spirit, and the availability of ’s first BU Accredited Lay Pastor, we were led in 2006 to call , an architect, to be our Pastor. He was inducted into the pastorate on 14th October 2006.Through faithful preaching, our vision  increased, putting Christ’s great commission into practice. Alpha Courses have led to conversions, baptisms and new members. Peter stepped down on 31st March 2017 and the fellowship is now in an interregnum phase.

A welcome awaits you so that you can be part of our story here.